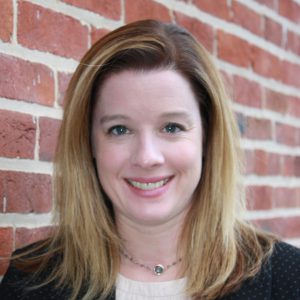 Lauren Morgenroth is the Chief Executive Officer and runs TRiNDS daily operations and procedures. She also oversees the Clinical Operation Solutions and team of Project Managers. Lauren has had a career in multicenter clinical trial operations for over 15 years.

She joined the Cooperative International Neuromuscular Research Group (CINRG), an academic clinical trial consortium for which TRiNDS is now the official Coordinating Center, in 2004. At CINRG she initially functioned as a Project Manager and site monitor leading up to her position of Operations Manager for the entire network in 2011. Prior to joining CINRG, Lauren ran multicenter clinical trials for the International Center for Epilepsy at the University of Miami and Miami Veterans Affairs Healthcare System. Lauren has a master of science in genetic counseling from the University of Pittsburgh and bachelor of science in microbiology and immunology from the University of Miami. As a certified genetic counselor Lauren worked for several years at the University of Pittsburgh and Children’s Hospital of Pittsburgh of UPMC muscular dystrophy association clinics as their clinic genetic counselor.

Lauren Morgenroth has authored over a dozen publications from research performed with the CINRG consortium. She manages the CINRG Duchenne Natural History Study and has lead the working group on Duchenne genotypes based on work she performed for her thesis on the disease-causing mutations in Duchenne muscular dystrophy. Lauren also received funding from the Foundation to Eradicate Duchenne to explore barriers to engagement in rare disease research and has published her work in this topic. Lauren has chaired numerous committees for neuromuscular groups and the genetic counseling community. She is currently on the National Society of Genetic Counselors Jane Engelberg Memorial Fellowship Advisory Committee and the Parent Project Muscular Dystrophy Scientific Advisory Committee. Lauren is an adjunct instructor in human genetics in the graduate school of public health, department of human genetics at the University of Pittsburgh. Lauren also volunteers in local and national Duchenne parent groups and is a frequent speaker at parent meetings for Jett Foundation.